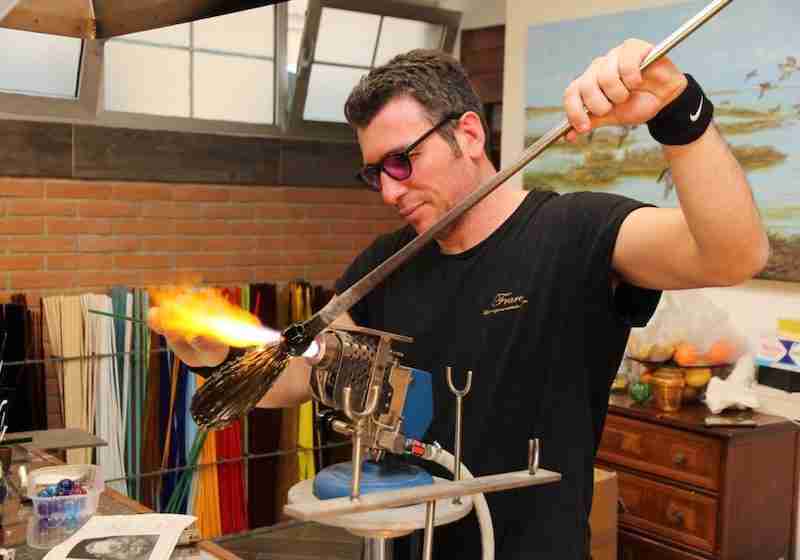 Dario Frare was born in Murano in 1977. Son of art, he begins to know the vitreous matter at a young age, passing by whole days next to his father Giuliano, master glassmaker. At a very young age he began to experiment with the material and tools of the lampwork technique, beginning to make simple objects, such as pearls and candies, passing, as the technique improved, to creation of animal subjects, with particular attention to those of its beloved lagoon, and parallel to human subjects, trying to obtain from the glass a representation as faithful and meticulous as possible not only of the bodies of women, men and children but also of the genetic, traditional and cultural characteristics of figures represented. From African Masai warriors to the enchanting geishas of the Far East, from thoughtful praying rabbis to red Indians caught hunting bison to many other examples, like the formidable samurai or the enigmatic priests of the Mayan dynasty: everything in the facial features, clothing, expressions and accessories must recall in the right way the era, the geographical origin and the activity of the model depicted. Subsequently, he will enroll at the Art Institute of Venice, where he will face the specialization in the Glass Section, an experience that will stimulate him to deepen and structure the drawing technique, fundamental to complete his training, both as an artist and as a glassmaker.

Over the years Dario Frare has had the opportunity to meet and collaborate with the best Masters, both from Murano and other countries, also participating in numerous competitions and winning many awards.