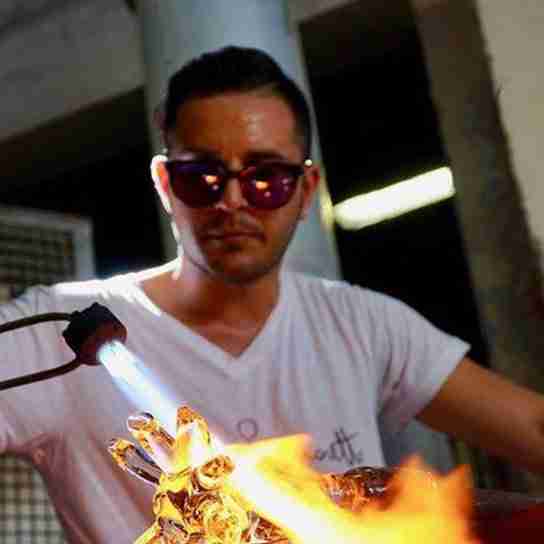 Since he was a child denotes a great dedication, ability and interest in the design that led him to choose, after completing compulsory education, to enroll at the Liceo Artistico (Art School of Venice) where he affirms and develops his artistic skills.

But his passion for the world of glass begins much earlier. His parents work in a glass factory in Murano, his father is an assistant of Maestro Walter Furlan and his mother is the daughter of the great Maestro Pino Signoretto. Martino immediately looks to be very curious about glass and very often stops in the furnace to observe his grandfather’s creations.

In the following years, Martino began to occasionally assist Maestro Pino Signoretto. He began to learn the techniques of glass processing, learning them directly from the Master and his team who saw in Martino a will and a rare ability for a teenager.

At the age of 17 Martino permanently joined the team of Pino Signoretto.

Assisting Pino Signoretto, considered the best master glassmaker in the world and famous for his eclecticism, permit him to learn all the techniques of Murano glass processing. He also has the opportunity to collaborate in the creation of the works of various artists and designers such as Hiroko Ueki, Marc Quinn, Ritva Liisa Pohjalainen, Oiva Toikka, Markku Piri, Harri Koskinen, Illka ​​Suppanen Adel Abdessemed.

error: Alert: Content is protected !!
Utilizziamo I cookies per migliorare la vostra esperienza d'uso del sito. Se continuate la navigazione ne accettate l'utilizzo. We use cookies to ensure that we give you the best experience on our website. If you continue to use this site we will assume that you are happy with it. AAV BarbiniAccetto/AcceptPrivacy Policy